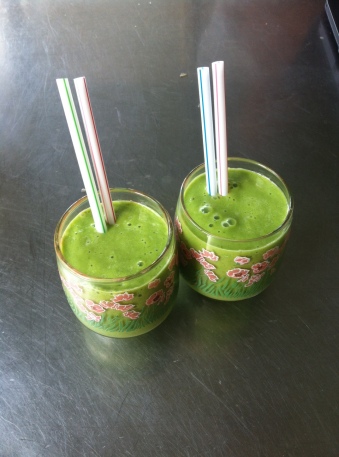 This afternoon, after I broke down from my sugar withdrawal and inhaled a packet of Neurofen, and was feeling human again, I googled more smoothie recipes because I am getting a teeny tiny bit sick of my peanut butter chocolate smoothie…

And I found a green one that looked yum and tried it out. Typically if I offer the boys anything that looks even vaguely healthy or has evidence of green vegetables in it they run screaming to the Dairy for a nice comforting steak and cheese pie.

Tonight we had a breakthrough – they loved the ‘Kermit the frog’. I named it but it’s someones elses recipe of course. I got it from http://www.simplegreensmoothies.com in the ‘5 ingredients or less’ bit. I changed it up a wee bit – going by what we had in the fridge. Here it is;

Whack the spinach and kale in the blender with the liquid and whizz until it’s whizzed. Then add the fruit and avocado and whizz it up some more – voila! (in the past I have not whizzed the leafy greens separately from the other bits and it has been bitsy and yuck – this time it was a revelation! not tiny bits of greenery in my teeth afterwards).

Then I told the kid it was a ‘Kermit the frog’ and, once I had calmed their fears that there was an actual frog in it – they drank it and Master 7 liked it! success! He said ‘Mum we can drink these in the morning after we go running eh?’ and I went all warm and fuzzy. We got him running shoes today so he is a bit keen on it.

That’s all from me – melting in the heat but loving it – withdrawing and aching and nearly died in boot camp this morning – got the shakes HARD. But, like I said, I know why and I know how long it will last roughly so I’m not freaked, just hanging out for it to be over. Another Bootcamp session tomorrow – on the beach so it will be lovely and good for my soul – if not my poor old shaky legs….