Today I left work at lunchtime and went and surprised Master 7 in the playground; he was lying on the dirt, playing ‘drifting’ with his cars and best friend. The plan was to head up the hill to be with the fam because my Mum is having a hard time with the grandies and the lad is a nice distraction, but events and timing conspired against us and we ended up just hanging in town just the two of us. It was really nice. There is definitely something cool about playing hooky with your oldest child and just cruising around. We went to the library, did a few errands and did a little ‘lad’ shopping (cars, Tee-shirts with skulls on them and TWO ice-creams).

We are very slowly getting through the cleaning-up-before-the-inlaws-come-and-stay clean. The GD is vacuuming as I type and I finally managed to fold the washing on the laundry couch tonight! I had to do it in two lots and break to make dinner in between – very domestic and totes boring. Interestingly, while I was sorting it in to four piles, I found heaps of knickers for me and master 4, a few pairs for the GD (I don’t want to know) and none whatsoever for Master 7 – bearing in mind that this is weeks of washing. Upon questioning he admitted that although I throw clean underwear at him in the mornings he ‘stuffs them behind the couch and wears the ones I already have on’. Weeks of washing mind you.

Master 7 has been complaining about sandwiches lately, and not eating them for his lunch so we are trying out new things. Today he had 2 cold sausages, a muesli bar, popcorn, chopped up carrot with peanut butter to dip, apple cut up and some crackers. Not the most nutritional but all finger food for him.  He does like sushi, so tonight while I was making dinner I roasted a chicken breast and made two chicken and carrot sushi rolls. I don’t chop them because it’s easier to eat them as a roll. So easy to do and one of those ‘handy hints’ I got off a ‘busy mum is amazing and even makes her own fucking almond milk’ websites, you know the sort of thing ‘while I’m milking the goat and waiting for my kombucha to ferment, I like to use my downtime/free hand to make a healthy and nutritious dinner from scratch, and cook sushi rice at the same time’. 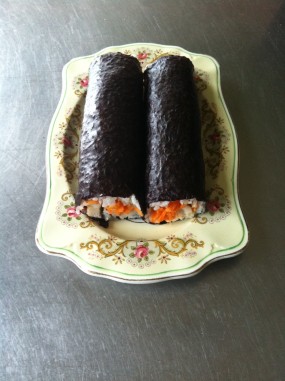 In other news I bought matching ‘UNT’ mugs for me and one of my grrls this afternoon. The handle makes them funny. Go on… you can work it out 😉