Did you know that in New Zealand it is Coeliac Awareness Week this week? From the 18th until the 24th of May the folks over at Coeliac.org.nz are going to be doing their best to make people aware of what Coeliacs is, the symptoms of it and how to get tested; And they will be promoting the stories of famous (or world-famous in NZ) folks who also have Coeliac disease. So this week I too will be focusing on ceoliacs ‘stuff’ in order to talk the walk or some shit.

I’ll start by ripping some stuff straight from the Coeliac.org site;

What is Coeliac Disease? Coeliac disease is a permanent, autoimmune disorder caused by an intolerance to gluten which is found in wheat, barley, oats and rye. This intolerance to gluten causes the body to produce antibodies which damage the lining of the small bowel and make it impossible for the body to absorb vitamins, minerals and other nutrients from food. Both genetic and environmental factors play important roles in coeliac disease and coeliac disease is hereditary.

There are no specific symptoms of coeliac disease. Every body experiences it differently (remember I am considered a ‘Silent’ Coeliac because I don’t get a lot of the more unpleasant bottom-related symptoms) Click this link to read about some of the symptoms which may occur alone or in combination.

Here is a photo of a cat who doesn’t have Coeliac disease;

How did I get diagnosed I hear you asking? Was I terribly uncomfortable every time I ate bread? Did doughnuts make me dizzy? Was I exhausted, bloated and fading away? Well, yes and no.

I went to the doc for my usual half yearly WOF. I try to go regularly to get my iron levels checked, anything else looked at and my general paranoia about dying of something random and possibly-parenting-related eased. This time it wasn’t my usual Doctor, she had left the practice and they had to give me a locum. It turns out this was a good thing because she wouldn’t be fobbed of with ‘Of course I’m tired, I have two small children, a fairly hard-core job and I get up every morning and go for a run! YES I am tired all the time but that’s got to be normal hasn’t it?’. Not so said she, and what are your iron levels like she asked.

Well, they were and have always been fucked. No matter how many beasts were slaughtered so that I may dine upon their iron rich limbs, no matter how many leafy greens I ate, no matter how many bloody iron pills I took; I was always very low in iron. Under 20 low. (That’s really low btw). SO on the basis of my general exhaustion, foggy brain and low iron she had me tested. And of course here I am.

That was in March of 2012. My bloods were so high that I was Coeliac enough for three people so she had me booked in a for a biopsy straight away. I then had to wait until September for the actual procedure (I tell you what, being unconscious for that was the best 1.5 hr sleep I have had in ages and since, oh to do it again just for the shut-eye!) and it came back confirmed. The villi in my gut was non-existent and the damage was extensive. I thought it looked pretty in the photograph but the medical people were horrified. Very bad they said.

And that’s me. I have been gluten-free since September 2012 and will be for the rest of my life unless they develop the mythical vaccine. 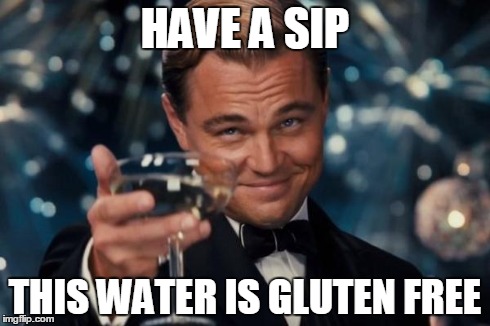