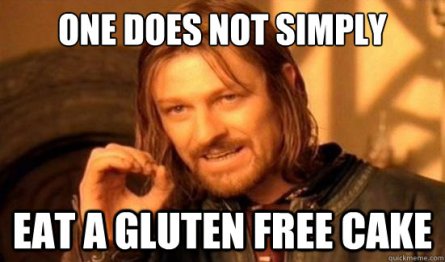 Well, not if one is sugar free too. Or if it has been sitting in the cabinet on the same tray with the ‘normal’ food. Or if the server picks it up with gluten-y tongs. Or if it was cooked in the oven at the same time as something glutenous. Or if when they bring it to you – and this has happened to me – they have drizzled it with a sauce with gluten in it without thinking.

In fact, the more I learn, the more I realise that I can pretty much only eat out at those wanky Paleo or ‘clean eating’ only cafes that are popping up all over Auckland (thankfully).  Places where gluten is a dirty word – even to the normals – and they don’t cook with it, don’t stock it and don’t say the word – they hiss it. These places are great – granted that they can sometimes get a bit heavy on the coconut oil – but they are good for me because I can usually safely eat something labelled GF and know I’m not going to get glutened.

Unfortunately because being GF is so right now, and people are pretty sick of hearing about it; saying you are GF in a cafe or restaurant is bound to get the servers rolling their eyes and visibly gritting their teeth when you need to order. I always say ‘I have coeliacs disease’ (so they know I’m not just affecting it – I’m not a hipster I swear!) but I am sure that this just means extra hassle for the establishment and I know I get fobbed off on things where I could be being more careful. Because I’m a silent coeliac I could be getting glutened and not know. Which is pretty scary because cancer. So we don’t get out much anymore.

But tomorrow night I am going out for dinner with some of my Dean friends from school . We are going somewhere that I haven’t been before and I am going to have to ring them tomorrow to ask if they have gluten free options that are safe for Coeliacs. It is a Japanese restaurant and a good one by all accounts so I am hoping I can eat ‘off the menu’ and not have to have a ‘special’ meal made for me with all the delicious-ness taken out of it.