My ring finger has developed a reaction to something (the joys of having a screwed immune system) and currently I can only fit my engagement ring and the ring I bought myself in to the smaller space available on my finger.

Some folks might read in to the fact that I am not choosing to wear my wedding ring, and have chosen instead to continue to wear the ring I bought myself. Luckily for me the grumpy Dutchman isn’t one to read in to these things. Being largely unsentimental he called me a self-involved bitch and happily went on his way. In fact if the GD had had his way I may not even have gotten a wedding ring – he would have been happy if the two of us just knew in our hearts that we were married and we didn’t do any of it. Not because he eschews material things and would rather collect ‘experiences’, no; he would have been happy not spending the money and saving it for something more important – you know – like records.

I have spent the large part of the day clearing out my cupboards, going through my drawers, sorting out old bags and shoes and putting together rubbish sacks of stuff for the refuge. Yes rubbish sacks, I have five so far, and I haven’t yet gone through the stuff in the kids room. (My stuff in their wardrobe – we have feck all storage in this house).

I don’t have any feelings about not wearing my wedding ring. The me who chose it nearly ten years ago (yes I chose it- the GD isn’t dumb) is definitely not the same person as the me who wears it today. For one thing I am nearly ten kilos heavier, have eight tattoos (I was an ‘unblemished’ bride – although I was pregnant so you know – swings and roundabouts) and I think a much more definite sense of style. Bear in mind of course that in a recent survey on Facebook 7 out of 10 of my friends said they wouldn’t be friends with me anymore if I bought these; 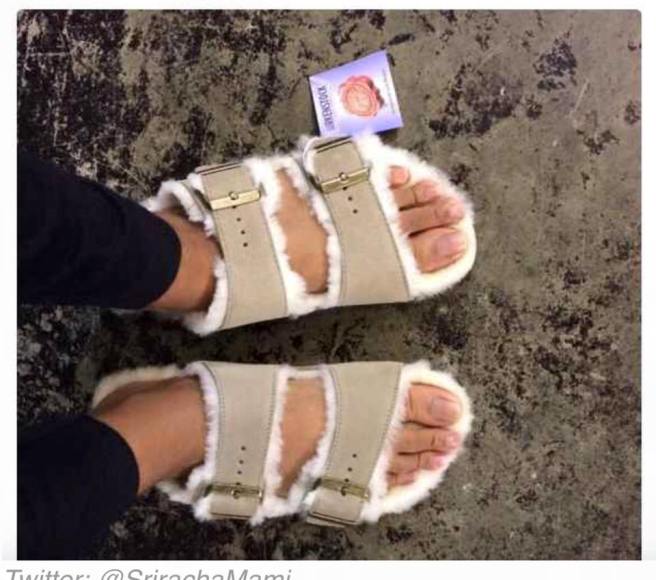 Anyway, the me I was ten years ago was a very different beast. She didn’t have kids, had just travelled overseas for the first time and thought she was SO worldly, wore mostly clothes from the op shops, was not allergic to anything – or was at least blissfully unaware, drank most nights with her friends and then got up every morning at some un-godly hour and ran for 8kms with the same friends, lost weight just by maybe eating a salad that night and really, really wanted to get a tattoo one day. Just a small one – in a discreet place, you know like my ankle or something.

I’m struggling at the moment with some of it. I’m obvs older, and mature-er and have different priorities – like keeping my kids alive through the holidays for example – and I have good friends and all sorts of great stuff going on.

And while the ten kilos extra doesn’t consume me like it would have ten years ago, and I am confident and fine mostly with the way I look on a day-to-day basis, it still bothers me. It bothers me that all the things I have done – which have worked in the past – aren’t working now. It bothers me that I can’t move as fast as I used to, and don’t last as long as I used to. It bothers me that my knee plays up when I run more than 5 kms – and god forbid – the pain has been preventing me from wearing some of my extremely cool heels. (Chuck Taylors and Birkies for the win but).

It bothers me that 3 years on from diagnosis my gut still blows right up like a pregnant womans randomly and that fucking salad can give me stabbing pain. It bothers me that it bothers me and that I havent found a definitive, actual thing I can do every time to fix it.

So, I’m trying a new look with just two sparklers on my finger while the rash heals. I’m getting rid of all the clothes that don’t fit me because holding on to them with no hope in sight of fitting them again is pathetic. I’m reading books about healing my gut and I’m sleeping in on Tuesdays and Thursdays instead of running and hurting my knee more. And I’m trying to ignore the voice in my head that says I’d be a better version of myself if I weighed what I did ten years ago. Because she was cute but I’ve got way more style.