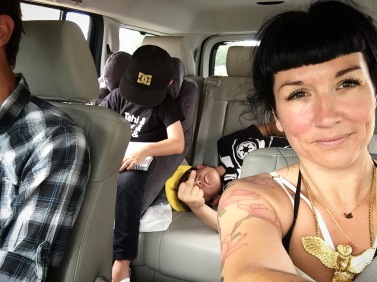 My husband describes me as ‘mostly nice’. Hmmmm.

I am a Teacher, Dean, Mother, ex-Art school kid, sometimes Photographer based in NZ. I have two gorgeous little lads, and am married to the Grumpy (funny, sexy, patient, hard-working, clever) Dutchman and we live a good life surrounded by friends and family.

In September 2012 I was diagnosed with Coeliacs disease, based on having being anaemic since I was a teen and general wiped out-ness as a grown up. Outside of those clues I am considered a ‘Silent Coeliac’ because I don’t present with all of the usual symptoms. However since going gluten-free I have felt worse. Yup. Worse. And it turns out that my gut is so damaged from the Coeliacs and the gluten I was (not) digesting that my body has ceased being able to process anything for its nutritional value and was attacking food randomly – leading to me feeling shite (and looking six months pregnant half the time).

I have seen half a dozen specialists who all gave me half arsed solutions – one guy just handed me a sheet of paper which had low FODMAPS written on it and said ‘try this’. No explanation or anything. It all felt a bit much really and I got depressed. Also weight gain – what you DON”T expect from going GF right? But not unusual. I tried spending a year not having all the stuff they said to not have. And that’s when I started this blog. It sucked arse (the diet not the blog). I lasted until Easter sugar free, until my birthday alcohol free (July so it was a good innings) and the rest all fell by the wayside as life got in the way.

In 2015 I burned out at work as year 12 Dean, and have since tried not be so restrictive – I also stopped writing in 2016 because my brain was , you know, fucking melted from work and shit.

Now it’s nearly the end of 2016. I have a new job starting next year at a new place, and my children are growing like weeds and the GD is still hanging around putting up with me. This blog started to evolve in to a more ‘holistic’ (read messy, whatever thought came in to my head stream of consciousness) place for me to rant about whatever was at the top of my head and will remain as such. Maybs the odd recipe, maybs the odd thing about the coeliacs or crazy skin or something but probs more about the ‘yoof’ that I specialise(?) in and my evil children and just whateves ok?